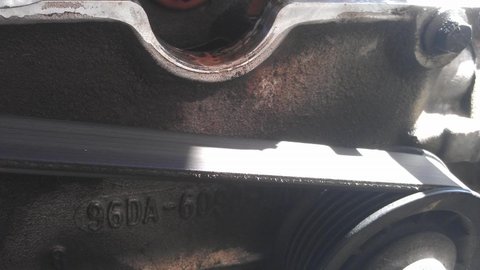 Late EL Falcons were released with a Hybrid AU head, which along with revised porting and valve sizes, has a different rocker ratio & valve stem diameter.

You can run an EA-EL camshaft on a Hybrid or AU head only if you change rocker gear to the E-Series ratio.  Valve retainers must be the correct size for the stem.  Valve springs are cross-compatible.

How to tell if you have an EL Hybrid head?

Check the casting number on the front left of your cylinder head:

See our range of camshafts to suit the EA-AU Falcon SOHC 4L 6 Cylinder.

The EL Hybrid engine had a few other revisions that place it between the E-Series and Intech motors. Below is a tech notice that was issued to Ford dealers on its release.

As of January 1998, EL Falcon will be fitted with a revised I6 engine. The revision will be completely transparent as far as the Customer is concerned (no change to engine appearance, power output fuel economy, service requirements, etc). It will also be transparent to you as far as basic engine maintenance and diagnostic procedures are concerned.

However, where internal engine repairs are to be performed, it is important that the Technician realises the difference and is aware of the unique engine re-assembly procedures and specifications.

Interchangeability of parts between the old and the new level engines is not possible except where replacement part numbers are unchanged. Do not attempt to fit new level parts to the new engine, or vice versa.

Vehicle Identification
There will be a period during January 1998 when both the old and the new level engines will be used at the Assembly plant. Thus the vehicle build date may not necessarily identify the level of engine fitted to the vehicle.

Note: Approximately 1,600 of these new engines will have the old level head and valvetrain fitted. The same idetification method may be used to individually identify new/old level heads.

Generally speaking, the engine dissassembly/assembly procedures are unchanged. The main difference is the size and shape of various internal components. It is important that only new level components are used as replacement parts as in many cases the old level parts will not fit or will lead to the failure of other components.

With respect to major engine repairs, the main points that you will need to keep in mind are:
-revised hardware tightening torque specifications (some components are now ‘torque to yield’).
-revised bolt tightening sequences.
-revised camshaft-to-crankshaft timing procedure.

Lash Adjuster Removal
The procedure for lash adjuster removal is unchanged. However the retaining ring has been deleted so that the piston may separate from the main body during removal if care is not taken. It is still recommended that the lash adjuster not be dismantled.

Torque To Yield. Components MUST be discarded and replaced if removed or loosened.

Want to join the discussion?
Feel free to contribute!

View the Knowledge Base